His eyes water. One nostril runs. He sneezes and wipes his nose with his little paw. I’m afraid it might be true: My guinea pig’s allergic to hay.

I remember when I first found out cats can get diabetes. How ridiculous is that? I don’t know why I thought that diabetes was a solely human ailment.  Maybe it’s because we have doctors building second homes the moment we tell them our symptoms, whereas animals are at the mercy of their humans first noticing something’s wrong and then packing them off to the vet.

Maybe it’s because animals have less choices than we have, so they shouldn’t have to get “our” diseases as well.

But a hay allergy? Is that even possible? Hay is a guinea pig staple!

Conventional lore says to give them as much as they want, so he always has a  mound in his cage, though he’s selective about which parts he eats (flower tops, thin pieces; no sticks).

This means a LOT of hay is never consumed. One time I told him we were going to send his hay to starving guinea pigs in other countries. This probably would have had more effect had he actually been listening at the time.

I’ve got the sneezes way too much myself, so we’re quite a pair, Reggie Pigg and I. We have the a/c on a lot, unfortunately, because we live in a condo that only has east-facing windows (big mistake there; yay for first-time home ownership idiocy) and the second floor where the bedrooms are & where he lives is beneath the attic, which gets baked during peak hours…

…and then kindly trickles down to heat the rest of the house all day & all through the night. I’m an open-window kind of gal, but we don’t want a baked pig either, so that means a/c when it’s 80-something w/no east wind. Plus, what do our windows look out on? A strip of lawn, a chainlink fence and then a Park’n’Ride. Traffic, fumes, the works.

So the a/c could be a culprit, but we recently purchased a few HEPA Air Purifiers to help with the congestion. And for the record, they’ve helped immensely, which may tell you a little something about how much we used to get stuffed up.

If it’s not the a/c, is it his shavings? We use Carefresh Natural, which he seems to enjoy, and since he’s practically immersed in it I’d think his reactions would be a lot worse & more constant. 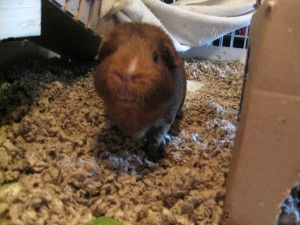 So: Hay. Great. But he’s a tough little dude; he doesn’t let watery eyes and nose slow him down one bit. I probably notice it more than he does. The vet isn’t sure what’s going on either, especially when every time we’d take him in, he’d miraculously be fine. Animals like to do that. 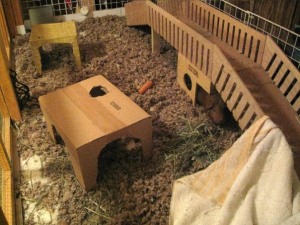 Apologies to AmericanGirl for the guinea pig homage (I always wanted the Samantha doll).