That’s the part I want to address.

Facebook is “free,” yes, in a monetary sense. We don’t have to use a credit card to build a profile, add pictures or find friends. PayPal isn’t required before you “Like” a business Page.

But we are paying for the playground we’re using–with information.

It’s the barter system. We’ve even got fees behind the scenes, though instead of paying extra ATM charges for the privilege of getting fast cash, we’re paying for Facebook’s services by giving advertisers every last ounce of information they can get out of us.

Facebook is a business, and the majority of its changes are to aid the people who DO pay them–the advertisers.

This sounds like a textbook economy lesson (and I’m no economist, so I may be getting some of this wrong), but if my information is worth that much, should that also mean I have some say in what I reveal and how it’s data-mined, regardless of the “free” service I’m using?

Perhaps we’re just lucky if we can get some use out of these changes ourselves! Now if only they could give us the Dislike button…

What’s your take on Facebook’s changes?

ETA: I’ve been informed that we’re not the customer, the advertisers are.

ETA #2: An opinion from a friend: “It’s nice that we get something we want, but if we don’t get what we want, but still keep using the service, then that’s free market capitalism.”

As for the below, I still say we’re paying in information. And coming out as bacon. 😛 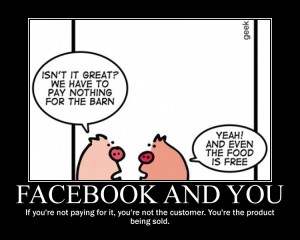 2 thoughts on “Why It’s Okay to Complain About Facebook”