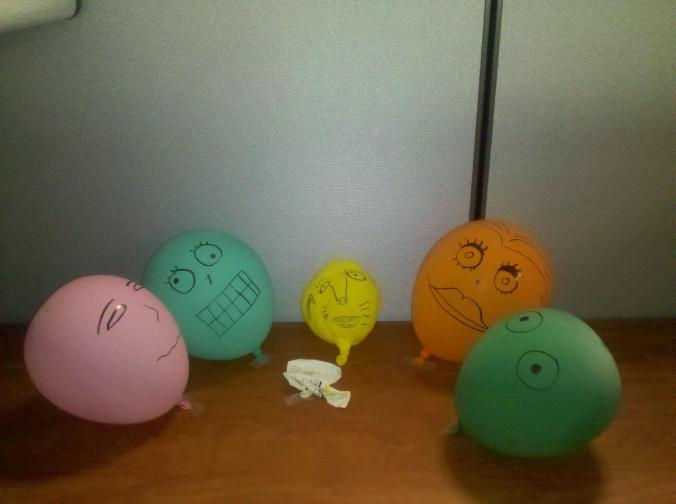 Though they met only a scant few months ago on the first day of their internship, this pack of seemingly disparate balloons formed a fast, firm friendship.

When summer ended and their senior year of college began, the interns even rearranged their heavy course schedule so they could continue to work with lead proofreader Erin H at a company they’d come to love.

The group had stayed late one evening to finish up a project when the unthinkable happened: Nellie was attacked by scissors.

“We have no idea who did it,” said Harold, face frozen in a manic grin. “We heard the door lock, the lights were shut off, and then–I can’t go on.”

“It’s not Erin’s fault, she’s the best boss I’ve ever had!” Angela enthused, before quickly sobering. “It’s a pity we have such crime in our workplaces today.”

“I don’t know what’s going on with the investigation but I want answers! We’re really fragile, you know!” raged a shifty-eyed intern, who asked to remain unidentified.

Alexander agreed, wiping a rubber tear from his eye before admitting their deepest fear: “Now we’re all wondering, who’s next?”

Part of the (new) NaNoWriMo series.