Prompt: Music is powerful – Think of one song that you turn to time and again, and describe why it’s important to you.

The trouble with a prompt like this is there can never be just one.

It’s the desert island question again. With music, so much depends on my mood, the circumstances, the ambience, everything. And despite my last post, at first I couldn’t settle on anything at all. Some songs I’ve heard through the years, some only came recently, some came back to me at exactly the right moment. Each one is essential.

I can at least say that when I’m feeling sad, it seems that nothing but rhythm’n’blues will do. Among all the musical styles I grew up with, the rhythm’n’blues and doo wop of the 40s and 50s has the strongest hold on my heart. That deserves its own post so I’m not going into it here because believe me, I’d fill this page up.

So I’ll give this prompt a different kind of shot–a wide shot–and tell you just a few of the many, many nuggets that are in my world.

Songs that make me stop everything and turn up the volume:

White Rabbit – Jefferson Airplane. I don’t even know why this song grips me the way it does, but it always has.

All Along the Watchtower – Jimi Hendrix. “There are many here among us / Who feel that life is but a joke.” I know people who are like this. I’ve felt it myself. (For me, this song also echoes this G.K. Chesterton poem with the line “There are souls more sick of pleasure than you are sick of pain.”)

Solsbury Hill – Peter Gabriel. This song came at just the right time for me and hit me square between the eyes. It gave me strength, clarity and courage when I needed it the most.

Bolero – Ravel. The recording I like best is with Charles Munch & the Boston Symphony, but this one directed by Andre Rieu is quite good (and much shorter, for those of you in a hurry). From the tiptoeing quiet of the opening bars to the crescendoing finale, I absolutely love this piece of music.

Songs I can’t look away from:

Sixteen Blue – Replacements. Think of yourself as you were around age 16, if you can bear it. Or just listen to the feedback-drenched guitar that comes in at 3:35,  wanders off into its own little stream of thought and then comes back to pierce you right in the heart. Transcendent.

Autumn Sweater – Yo La Tengo. The part that hits at 1:20 transfixes me in the kind of moment that lasts forever because in that moment, that’s all there is.

Pipeline – Stevie Ray Vaughan & Dick Dale. I can only describe the sound that starts at 1:10 as “zinging” off the guitar, and it comes back after that, oh yes it does. Though I gave away my guitar, I remain a guitar-worshipper.

Songs I never fail to sing wherever I am:

Cloudbusting – Kate Bush. “Oooh, I just know that something good is going to happen / I don’t know when, but just saying it could even make it happen…” I can’t listen to this song without crying just a little, even as I’m singing my heart out to it. This is a picture-song even if you never saw the video, and the heartbreak of it gets me every single time.

Joey – Concrete Blonde. The first time I heard this song was when I saw the video. I was completely overcome. Johnette’s heart-throbbing voice, her presence, the way you can just see her eyes under her bangs as she stands there and sings–it goes right through you. And I’ve known a couple Joeys.

Gypsy – Fleetwood Mac. This song is perhaps the closest I’ll ever come to “that song,” the one I could play over and over and never tire of it. I identified with it so strongly growing up. Over the years it’s become so much a part of me that I don’t listen to it as much as I used to.

Alas, I’m falling into the error I knew I would–loading you up with too many songs! I know I’ll think of others I should have included, or want to scrap this post and load you up with obscure rhythm’n’blues songs instead that probably aren’t even on YouTube.

Wait, this one is: Nobody But You – Dee Clark. I think you’ll like it. Listen to the end–that’s his falsetto!

I’ll leave you with this:

Billie Holiday’s last recording session. There’s something about a ruined voice that grips me and always will. Think Bonnie Tyler and how much power she put into “It’s a Heartache.”

My dad has this album so I hope I’m remembering the circumstances correctly: Billie’s last recordings were in a studio with an orchestra backing her. Her voice is a fractured ruin, cracked, sliding off the scales. You’ll see in the picture she’s got a glass in her hand, and I bet that’s not water.

Yet there’s a moment where Billie is singing and the orchestra stops playing–and she doesn’t notice it at all, just keeps on singing, and it’s the most incredible thing, because all of her life is in that cracked and ruined voice–and that makes it beautiful. 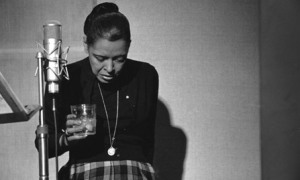