“One morning before going to school, Christian asked his daddy a question he had been thinking about for a while.

“‘What color am I? A boy at school told me that I am black, because you are black.’

“His daddy thought for a moment and then said, ‘There are a lot of people who will call you black, just because I am black; but if you don’t feel like this fits you, then don’t accept this label.

“‘You are only half-black. You are also half-white, which makes you mixed. Think about what color fits you best, and that is the color you tell people when they ask about your race.'” – I Am Tan by Michele Rose

Michele Rose is a writer and photographer. She is married and lives with her husband and son in Florida, and is currently in her third year of school seeking her BA in Art. She visits elementary schools to talk to kids about stereotypes and race, while continuing to write. Your book, “I Am Tan,” instantly captivates readers. Tell us about it!

“I Am Tan,” follows a six-year-old bi-racial boy named Christian, through an interesting day of questions and answers, on his quest to find what color he is in a world that wants to label him as only black or white. By the end of the story, he sees that there are many different racial mixes, and that mixed people are shades of tan; so therefore, he is tan! The story also touches on what a stereotype is, because labels are often accompanied by stereotypes.

“I Am Tan” is written from the perspective of six-year-old Christian. Is this character based on your son, or other children you’ve met?

When my son was about five years old, he colored his first picture of his family. While doing so, he realized that the brown crayon he used for his dad was too dark, the peach crayon he used for me was too light, but the tan crayon was just right for his color. I used his own phrase “I am tan,” to write the story. Also, many of the interactions in the story are based on actual conversations and responses given to Christian.

One reviewer criticized you for focusing on color instead of race, how do you respond to this?

I kept Christian’s simple answer he came up with, which focuses on color instead of racial make-up, for two reasons.

Reason one: Here in America, color is one of the main words used to describe someone. For instance, do you hear: “Look at that Scottish Caucasian man standing by the door,” or do you hear: “Look at that white man standing by the door”? This goes for black people too. In fact, my husband says he is a black man, not “I am African-American.” He points out that DNA has shown that all of humanity began in Africa, not just black people, so technically everyone here in the U.S. is “African-American.”

Reason two: Perhaps then race should be determined by more recent migrations? A woman who immigrates here from Senegal can accurately call herself African-American, because that is where she knows she is from; but for my son who is mixed with black, white, Asian and American Indian, and at least the sixth generation born here in America, is calling him African-American or European-Caucasian the most accurate description of who he is? No. He is more than just African-American, Caucasian, black or white, and he and millions of other racially mixed people deserve their own color recognition.

Christian gives them this, with his words, “I am tan.”

What do you hope people will take away with them the most after they read your book?

This is a question most mixed-race children will have at some point in their lives. Hopefully they will gain insight from Christian’s day of learning about stereotypes and his color identity.

Children from other races will benefit from this book too, by gaining a better understanding of diversity and inclusiveness. This book was written for children, ages 5 – 9, and is meant to be on the level of a small child; therefore, parents need to take this book as the intro it is meant to be, and have further discussions of race and stereotypes with their children as they grow older. 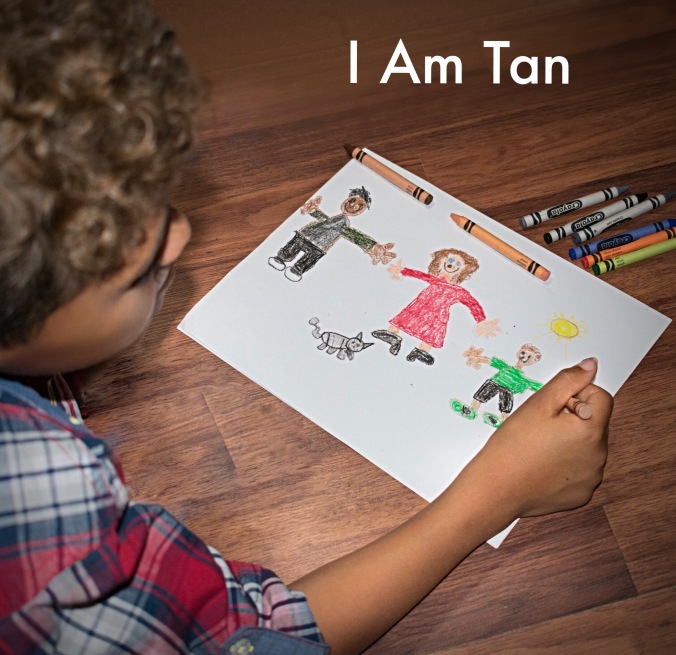 Right now you’re running a Christmas 2017 giveaway—tell us about it!

The winners will be drawn live on Facebook, on December 11. There are many prizes, with the grand prize being 20 children’s books to be delivered to one lucky winner’s door by Christmas!

Two more winners will win physical books and 6 will win digital books. We have several authors participating, so some of the books are autographed! Also, Christian donated 21 books from his own private collection!

The complete list of prizes and rules are posted on the “I Am Tan” page.

You clearly have the gift for writing children’s books, and have a great style! Do you ever see yourself branching out into other genres?

After Christmas, I plan to start writing historical fiction. I have an idea for what will end up being a series of books. Stay tuned…

Now for some just-for-fun questions…

What type of book do you reach for to relax?

I haven’t had much time for relaxation lately, but I still manage to listen to audiobooks while driving. The most recent one was by John Grisham, called The Rooster Bar. I have found that I really like his books, so I am working my way through all of them on audio now.

Do you read your book reviews? How do you deal with good or bad ones?

Yes, I read them. I have a lot of good 4 and 5 star reviews, but I also have one 1 star review. That one resulted from a dispute on Facebook with a woman who hates white people. I let it raise my blood pressure when it first happened, but I have since learned to ignore the review and the woman who wrote it. That issue did bring to light something that is often overlooked in racial discussions, which is black people can be racist too.

While we’re not saying you need this, what one thing would you give up to become a better writer?

My cell phone. I stay glued to it at times, while I should be working.

If you could go back in time, what writerly / illustratorly advice would you give yourself?

Don’t give up your day job! Only a few writers ever “strike it rich.” The rest of us know what poverty is!

Here’s where to find and follow Michele, and purchase her book!