“Day returned to evaluating Rhea in a purely unprofessional manner. She was short, slender, but curvy–maybe–who could tell under the lab coat? Ok, so obviously lab personnel. Her dark hair was tied back in a high pony tail and her glasses didn’t seem to fit as she kept pushing them back on her nose. She wasn’t the stuff of his usual conquests, but there was something about her. Couldn’t quite put his finger on it, but he wouldn’t mind the opportunity to try.” – Modified: Lunar Medical: Book 1, by Amy J Hamilton

Amy J Hamilton is about 300 years old, writes erotica, hails from another planet, and is married with two teenage kids.

She has a house full of a variety of animals of the non-human nature: Tropical fish, a degu called Sam, a tortoise named Crunch, and a bearded dragon named Cossie. Sam is bigger than a hamster and smaller than an elephant.

Crunch still fits in the palm of her hand. Cossie talks and flies while breathing fire, but don’t worry, she’s well-trained! There hasn’t been an incident with the fire brigade for awhile now. Despite all this, Amy runs a small business in her spare time when she’s not writing, thinking about writing, or thinking, “I really should be writing right now.”

Speaking of writing, her debut novel is out on Amazon: Modified: Lunar Medical: Book 1.

She recently alarmed medical professionals when a blood test revealed that she does indeed have blood and not coffee in her veins.

Modified: Lunar Medical: Book 1 is one of the most original and instantly intriguing titles I’ve ever seen. How did you know when that title was right for your story? How did you pick your character’s names? What parts do you wait in glee for readers to get to?

Thank you for saying so. I’ll just come right out and say I hate naming stuff! I find that I name things that already exist and have to rename them. In the end I chose Modified after thinking to myself so I’ve created these randy super soldiers through vague genetic modification…yeah that’ll do-Modified. As I couldn’t see me getting away with calling all the characters 1, 2, 3 etc. I’ve taken place names where I was stuck, Daytona became Dayton, shortened to Day, his surname is a place in London. I can’t wait for people to get to the end and see to be continued and say “Aw, I was enjoying that.”

What qualities would you say are essential for writing erotica? (Sense of humor, lack of self-consciousness, vocabulary, pseudonym…)

A pseudonym helps as I may want to distinguish between erotica and other genres later on. Some people like a pen name for erotica because they can hide behind it. I’m too much of an attention seeker for that! I think all you need to write erotica is a bit of experience and an understanding of spatial awareness–the body parts have to connect! They can’t do that if he’s in another room. Stick to a couple of slang terms for anatomy rather than using the whole Urban Dictionary. I write with a sense of humour because I’m naturally warped but it’s important to draw a line at some point in the scene where the humour ends or the risk is you end up writing farce which is fine if you’re after farce. The other thing to remember is no one person can write an erotic scene that everyone will approve of. Just because one person hates it, doesn’t mean everyone will.

I love all the animals that have taken over your house. Did you grow up with degus, tortoises, bearded dragons, and etceteras? Does everybody get along, or is there a definite hierarchy (and are the humans at the bottom of it)?

No, my dad was allergic to fur, so I’m making up for lost time. We only had tropical fish growing up. There was a brief stint with gerbils, but I wasn’t really allowed to do anything with them in case they escaped. The other day I had the bearded dragon out on the living room floor where the fishtanks and the degu cage are. The fish are mostly oblivious, but the degu was definitely wary and wouldn’t take his eyes off her! The animals are in different rooms and in different habitats, so they rarely interact with each other or the other humans for that matter. Technically the tortoise belongs to our son and the bearded dragon belongs to our daughter. Guess who feeds them all…?

What genres would people be surprised to know that you like reading?

Interesting. I don’t know. But I do read crime, horror, mysteries, and smaller amounts of sci-fi and erotica. I’m not averse to listening to an erotica audio book read by a man though… 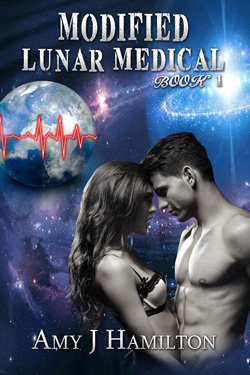 Do you ever see yourself branching out into other genres?

I expect I’ll write horror at some point. It’s what I grew up reading. No doubt it’ll be weird horror rather than serial-killer-could-happen-in-the-real-world horror.

Do you read your book reviews? How do you deal with bad or good ones?

I do read the reviews. Obviously the good ones are easy to deal with. I find bad reviews very hard to take. I’m lucky that there have been so few, but always expect others. It’s difficult to not take it like a personal insult. It takes a while to get over, but in the end I have to play the numbers game and tell myself that there has been a far more positive response than negative one.

When a new story comes to mind, do you see the whole high-level plot roll out before you, or do you see it as more of a first sentence / initial concept (or both, or something else)?

Although I knew a vague outline for the second Lunar Medical book the entire story started from the line, “Is anyone else itchy?” I generally now start with banter.

How do you feel about fan-fiction? Would you want people to write fan-fiction about your stories?

I’m not sure I have a view either way. I’d be very surprised if anyone did want to write fan-fiction about anything I’ve written.

What are you planning to launch next?

Just because people keep asking I am going to publish Nate and Day (Lunar Medical book 2) next. It’s almost finished. I might follow that up with a short story.

Now for some just-for-fun challenge questions…

What type of book do you reach for to relax?

Do you listen to music as you write? Name some songs!

Not as I write, but I did recently download some Ed Sheeran, Train and Rag’n’Bone Man. Rather impressively these are all recent releases and not things I used to listen to in the 80s which would  be a lot of George Michael!

When you get a story idea, do you scribble it on any scrap of paper or napkin you can find, or do you have a special notebook or online tool where you keep all the inspiration?

I use Notes on the iPhone. I also have a paper notebook for when I’m at the laptop.

While we’re not saying you need this, what one thing would you give up to become a better writer?

If I didn’t need the money-my other business, this is all running on the assumption that with the extra time everyone gets better as a writer.

Advice time–in reverse! If you could go back in time, what writerly advice would you give yourself?

Don’t think too much, just do it.

Here’s where to find and follow Amy, and purchase her books!