“Kay MacLeod has developed a complex world of social hierarchy, inventive lands, and a threat to the existence of this world. However, it’s her main characters that will grab onto you and keep you reading to find out what they can do and how they will defeat evil. MacLeod’s use of special powers is ingenious and her character’s interactions provide humor and realism to the story.”

Kay MacLeod’s Heirs of Power (The Constellation Saga Book 1) is an epic YA fantasy full of swords, sorcery, and sarcasm. Ten very different people have inherited incredible abilities and magical weaponry from their parents. Along with the responsibility to save their world from invading spirits that feed on life energy.

If you love ladies who kick ass, guys with superior snark, and original magic powers, this is the book for you!

Keep scrolling for a description, excerpt, and more.

Heirs of Power by Kay MacLeod

After stumbling upon an otherworldly ritual, Kitty Fairlow discovers that her own incredible hunting skills are not merely due to a lifetime of training. She’s been gifted powers from an ancient spirit, passed down by her father. She is a Constellation.

And she’s not the only one.

A new generation of heroes have each inherited unique abilities to prevent the corruption of their world by the Tenebri, a race that thrives on life energy. Kitty, along with a high-born dancer and a snarky juggler, must find their allies before the Tenebri army picks them off.

With the powerful enemy emerging, can the Constellations gather in time to put an end to the threat for good, or will their foe succeed and wreak the same destruction they have unleashed on their own world? 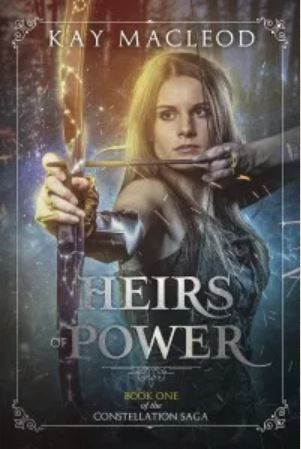 Kitty grabbed Serena’s arm, intending to pull her back to the room. Maybe they could escape through the window?

It was too late, they had been spotted. Serena pulled away from Kitty’s grasp and tore out her fans. Kitty moved to deploy her bow as the soldiers charged, hoping to take down a few before she had to rely on her knife. In that instant, her stomach flipped. She suddenly found herself next to a door leading out of the building, just a step behind the enemy soldiers.

An imposing man stood with her, his hand on her arm. He looked a few years older than her and was tall and slim with a scruff of dark blond hair and messy stubble. He was obviously not part of the soldiers’ squad – he wore no armour, just a loose, black cotton top with elbow-length sleeves, rugged trousers, and a self-satisfied smirk.

His grip tightened and he unceremoniously shoved Kitty behind him before she had time to react. She caught herself and succeeded in remaining upright. The closest soldier spun around to face whoever had approached him from behind. The blond man lazily tapped the enemy with one finger and glanced across to where Kitty had been a few seconds previously. The soldier vanished, and Serena appeared in his place, brandishing her war fans.

“Asher!” she exclaimed, her relief palpable.

“Who else was gonna come rescue you, Dancer?” Asher was deep voiced, with a local accent. He turned to Kitty with an unhealthy amount of anticipation in his massive, liquid brown eyes, “Cover us, Archer.”

Asher drew a short sword from his belt with his left hand and launched himself into the centre of the battle. The squad had quickly realised their quarry had shifted and moved to surround the trio of Constellations. Kitty put herself in the doorway, so she couldn’t be flanked, tucked a stray piece of hair behind her ear and began firing Venethos’ conjured arrows into the mass of soldiers.

Serena wove around the enemy soldiers, her fans flashing as she waltzed between the incoming blows. She took the head off one man before spinning low and hamstringing another, her regal features still arranged into their usual calm expression.

Asher’s style of combat was unlike anything Kitty had seen before. It seemed that he used his strange swapping power as a weapon. He was never facing the same man for more than a second or two, constantly flicking between the soldiers. He kept at least one hand free to tap his target, using his short sword ambidextrously to combat unsuspecting foes as they unknowingly materialised in the blade’s path. Even just watching was making Kitty feel queasy, she couldn’t imagine how disorientating it would be to try and fight against.

Five soldiers broke away from the rest and headed for the staircase, readying their bows. Kitty put black and white arrows into three of their skulls when another small group rushed straight at her, swinging cleavers and screaming war cries. She felt an unusual calm settle over her as she lined up her first shot. Venethos was an exquisite weapon; it felt perfect in her grip and she swore that it improved her aim. It seemed to be an extension of her body and senses, a sleek predator felling her enemies one-by-one. She would have to break soon though – they were getting close. Kitty tensed, ready to duck an oncoming strike. Biting down nausea, she found herself on the marble counter at the other end of the room.

“Treacherous whore deserved it,” Asher commented jovially as he blocked a sword strike from one of the rapidly decreasing number of soldiers on the floor below her.

Kitty struggled to understand until she looked over to the spot which she’d been moved from. The woman that had betrayed them had taken the blow intended for her. Asher had switched the attendant into the path of the cleaver and now she was sprawled across the entrance, previously spotless skirts dyed a bloody red.

Kitty felled the remaining enemy archers before they could snipe at the Constellations.

“I was about to dodge,” she huffed between shots.

“Yeah, but two birds and all that. Now you got the high ground and I don’t have to kill her myself.”

Get Heirs of Power here.

“The Juggler is an anti-social snarkmaster called Asher, and he is -without a shadow of a doubt -one of the most amazing fictional characters I’ve ever fallen for. Asher is just so wonderfully sharp-witted and damaged and adorable.”

“It’s a wild adventure crammed with twists and turns. But above all else, this is a character-driven story with real depth and emotion and humour.”

Kay MacLeod is a fantasy addict from England. She spent most of her teenage years playing Magic: The Gathering and being a Dungeon Master in Dungeons and Dragons games. She also loves reading fantasy novels, painting fantasy miniatures, and playing RPG videogames like Dragon Age and Pokémon. You could easily win her friendship forever by bringing her a cup of tea (not too strong, with milk, no sugar). 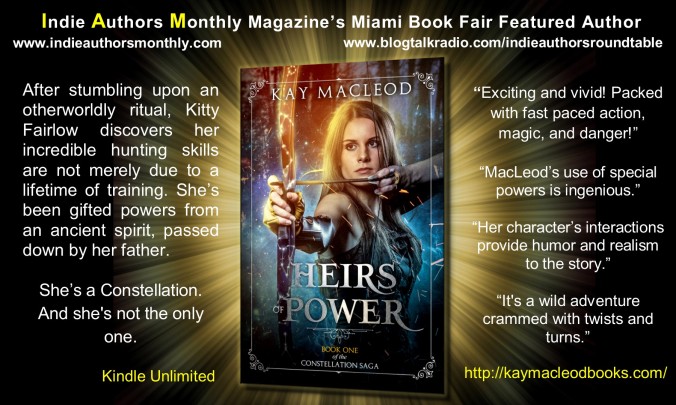 Post #12 of the holiday bookroll for participants in Indie Authors Monthly.