You know it’s been a good time when at the end of the event, your face hurts from smiling.

The Squeezor here is an old pro at keeping his smile on: “It ain’t no thang,” he said. 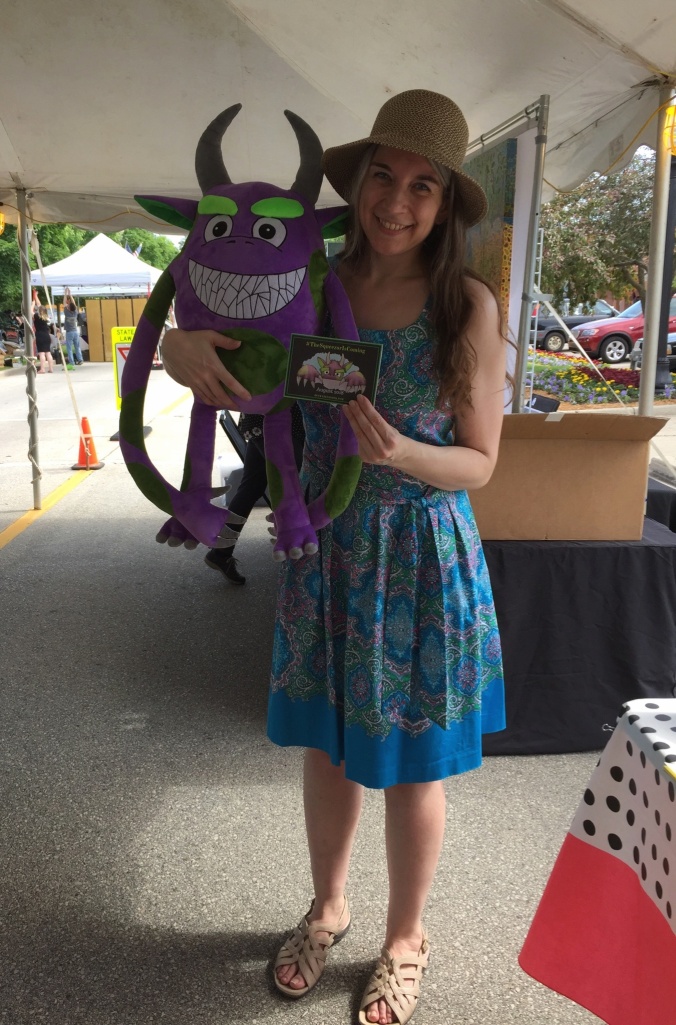 Before the show began!

You may not think of it this way if you’ve never been on the inside of the table, as it were, but putting yourself and your dream out there in the public eye takes some fortitude, physically, mentally, emotionally. Don’t be surprised if you’re exhausted all the next day or so. I was!

No matter what shape your dream has taken—book, artwork, candle, food, etc.—no matter how nervous you are at facing the public, I truly believe it’s important you convince yourself it’s worth it to share who you are and what you’ve done.

So with that, here are my experiences, and I’ll also share some tips.

I really enjoyed the conversations I got into: I encountered a lot of unexpected facets and camaraderie! It was great.

I had a “Take a picture with the Squeezor!” sign, and kids and adults loved him. I made sure to include my #TheSqueezorisComing postcard with each picture, in hopes that people would post on social media with the hashtag.

When people want to hear about my books, just try and stop me! Here I’m going through the plot of Hush, Mouse! (out later this year).

I believe I’m at the point where Mouse and Little Liz, despite their small size, have successfully stopped a major—well, I won’t spoil it. Yet. 🙂

Storytelling time! I’m right at the pivotal point of “Hush, Mouse!” (one of my upcoming books)

I had people say they glad to see multiculturalism (Hush, Mouse!) as they had had no such representation growing up.

There were several people drawn in to Dr. Guinea Pig George, because they had a guinea pig (current or past) that looked like George!

One couple regaled us with a tale of their lookalike guinea pig, Dot, who had come into their lives pregnant–unbeknownst to them, as often happens with guinea pigs–until: “One day, we woke up to see that Dot had two little Dots!”

Twilight now, perhaps 45 minutes left to go. The sun, which had illuminated everything for hours, was finally, mercifully below the line of buildings behind me. We’re all still smiling, though!

Things I Learned If I’m Going To Do This Again (and I think I should):

Pay attention—to everything. How other people set up their booths. Vertical and horizontal displays. Banners. I didn’t have one because this was my first event and I wanted to see options before investing more than I already have. But I noticed how people’s eyes look up as well as down.

And observe what the crowd is going for. Is this a crowd here to buy books, or are they more trinket/clothes/food-minded? Is this venue really right for you, or should you look at other options in the future?

Plan for the unexpected. We all knew the storms that had rolled through the day earlier would be gone by the time the event started. The sun came out so we knew the crowds would, too. Yet early in the event, a few really strong gusts of wind knocked things all askew, even the Squeezor! I employed rocks to hold things down until the wind moved on.

Mind you, a strong gust of wind can help you get to know your fellow vendors. We were all returning items to each other’s booths.

Where and how to set up. I appreciated having a spot in the “big tent” for my first run. Lighting was provided, too. I just had to bring my table and stuff!

I adjusted my display several times to account for things I hadn’t planned for when in the safety of my living room: The aforementioned wind, a tent pole in the middle of the space, etc.

I saw how people outside the big tent had nice, three-walled tents, and I may opt for that next time, especially if the walls can roll up and down. I would have to provide my own electrical cords & such if it’s an evening event, but for the sun protection, I would have loved that.

Another Important Thing I Learned

Storytelling draws a crowd. Could be a small crowd, could be a large crowd, but anytime there’s someone more than just you at your booth, it’s a win.

Telling a story is perhaps the best way to get your book across. Yes, there will be people more content to flip through and read for themselves. You’ll get to know their preferences as you observe.

When you do tell a story,  let your natural enthusiasm shine through! Don’t be afraid to gesticulate, grimace, groan, or grin at appropriate moments. And don’t forget to keep your mind on the narrative and observe the reactions of the people listening. Are they riveted? Is their attention wandering?

If you’re nervous about stepping out of your shell, just think how you already took the big step of showing up to the event in the first place. The old “fake it ’til you make it” mantra works here, too. 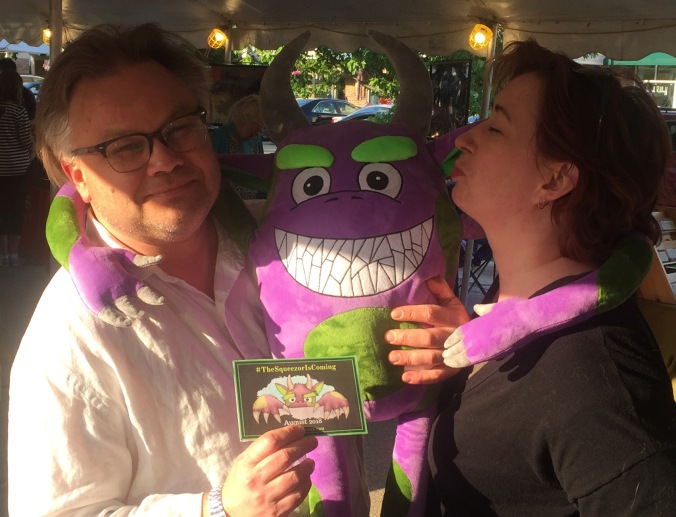 The Squeezor with his long, squeezy arms!

Are you a seasoned vendor, or coming up to your first time? I’d love to hear about it in the comments!

“Since the weather seems to not be easing up at all for us, we will unfortunately have to cancel Gallery Night tonight. We have had several vendor cancellations, and at this point we do not want anyone to damage their art and products due to the wind and rain.”

If you could have seen my face! I am actually quite relieved.

I’d have gone anyway because it’s a rain or shine event, and what better way to learn how to become a rockstar vendor than to do it in inclement times? That was my stalwart philosophy.

But believe me, I was planning on layers, a winter hat, mittens. . .all the things I was within moments of stuffing up in the attic because it’s MAY, not December, yet here it is, 40 degrees, gusts up to 25 mph, and rain. (I was also wondering if I could bring a space heater.)

Thank you all for your support. They will reschedule, so it’ll happen at some point in the upcoming months, and I’ve got everything ready for when it does!

More details here. Be there (if you can)!