“My brush with cancer made me realize my mortality.  I learned that if I really wanted to write and be published, I needed to start now.” -Debbie Manber Kupfer

What happens when you choose to be an indie author? How do you get yourself into anthologies? What essential message does Adana the Earth Dragon have for children? Meet the brains behind the P.A.W.S. Saga, logic puzzles, and more when you— 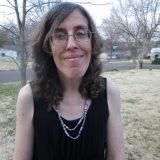 Debbie grew up in the UK in the East London suburb of Barking. She has lived in Israel, New York and North Carolina and somehow ended up in St. Louis, where she works as a writer and freelance puzzle constructor of word puzzles and logic problems. She lives with her husband, two children and a very opinionated feline. She believes that with enough tea and dark chocolate you can achieve anything!

You are an extremely prolific writer! Which genre or genres did you start out with? Was there a genre you thought you’d focus on first, but ended up going in another direction?

I’ve been writing ever since I was a kid, but only started taking myself seriously as a writer when I started writing P.A.W.S. in 2012. My first love has always been fantasy, and that’s where my main series lies, but I like to experiment in other genres in my short stories.

I also love cats, and nearly all of my stories have cats of some sort in them.

With Adana the Earth Dragon set to launch this spring, you must be super excited. How did this little dear of a dragon hatch for you? What plans do you have for the launch?

I wrote Adana’s story originally for a fantasy anthology that was supposed to have the theme of the elements. For various reasons the anthology never came about and my little dragon was left without a home.

Finally I was fortunate to meet my illustrator, the wonderfully talented Tina Wijesiri, online and slowly my little dragon came to life. I’m so thrilled how it’s all come together. We not only created a picture book, but Tina also made me line drawings for a companion coloring book and activity book and I added puzzles. I’m currently talking to several local bookstores, libraries and schools about release events.

I officially release on Earth Day (April 22) and am already taking preorders for signed copies of Adana the Earth Dragon and the companion coloring/activity book.

What do you hope children will take away from Adana’s story?

That no matter how small and insignificant you think you are, you are important and have unique strengths. Also that it is important to protect our Earth – so no stomping on flowers.

I love your concept for Cecilia’s Tale. Is Cecilia based on a particular cat of your acquaintance, or cats through the ages?

Yes, Cecilia’s Tale is loosely based around the story of how my cat, Cecilia (Cici for short) found me and adopted me as her human when I was living in Jerusalem.

Eventually after I met my husband (an American) I moved with Cici to the States. She wasn’t a huge fan of the plane ride. She lived with us for twelve years until she finally crossed over the Rainbow Bridge in 2007.

I wrote Cecilia’s Tale in her memory and Cici also appears in my short story, Will There Be Watermelons on Mars.

Let’s talk P.A.W.S. The plots in “The P.A.W.S. Saga” look thrilling. How did your characters come to mind? How challenging is it to write with a supernatural twist?

The P.A.W.S. Saga has been living inside my head now for six years ever since I first came up with the beginning scene – Miri receiving her grandmother Celia’s silver cat charm the night before Celia dies. Fantasy is my natural genre – both what I most like to read and to write. I see magic everywhere and often times folk I see around me or snippets of conversation I pick up become part of P.A.W.S. Actually when I write other stories they usually end up being part of the P.A.W.S. universe even when I didn’t intend it that way.

So, for example, my evil green fairies, the Tegs, started off in a short story I wrote for an anthology and then found their way into Argentum (book 2 of my series) and have stayed ever since.

You’ve contributed to several anthologies, such as Sins of the Past. How did you get involved in these collections? What tips would you have for authors who are interested in being part of anthologies?

I love being part of anthologies and have been in quite a few. Some like “Stardust, Always” and “The Longest Night Watch” raise money for charities which is an added bonus.

The Sins of Time series is a joint project between me and Chasity Nicole. I’m the editor of the horror series which so far has three titles – Sins of the Past, Sins of the Future, and Sins of the Gods. We’re currently working on book 4, Sins of the Fae, and I encourage any of your readers who like to write horror to join our Facebook page for details.

Otherwise, keep your eyes peeled for calls for submission to anthologies. There are so many out there, but if you don’t find one you like you can always start your own!

What appreciable differences do you find among writing for children, writing for teens, and writing for adults? Has anything surprised you at being the same across ages?

I don’t set out to write for any particular audience. I just write my story and see where it goes. And I don’t believe in dumbing language down for younger readers (or for older ones for that matter). At all ages we want to be drawn in the story and care about the characters. It doesn’t matter if it’s a little earth dragon, a homicidal android (I wrote about one of those for Sins of the Future), or a werecat, the reader needs to care about the characters.

I love logic puzzles, and you’ve got a set of 39 in Paws4Logic! Have you always created your own? When did you first start getting into these puzzles?

Creating puzzles is my “other hat” so to speak. About half of the time I write and edit. The other half I write puzzles, mostly for Penny Press magazines and my website, Paws 4 Puzzles. I write all sorts of word and logic puzzles. Paws 4 Logic was a passion project for me and my son, Joey. We both adore puzzles and wanted to create a book together.

I first discovered logic problems when I was a kid in London. I remember my excitement when I bought my first magazine. I was home. It didn’t take long until I started creating my own and my son Joey also has the puzzle bug.

When you started publishing your books, what would you say surprised you the most about the publishing experience (good or bad)?

I started off published by a local small press. My biggest surprise I think was that they didn’t do very much when it came to marketing. Most of that still fell on me. Two years later when my contract was up I decided not to renew and today I self-publish with CreateSpace and KDP and like it a whole lot better. I still of course have to market my own books, but I also get to make my own publishing decisions about covers, release dates, prices, etc.

Small press has its place and is particularly good for those who are new to the business or are not very tech savvy. But I’m happy as indie and would only go back to trad publishing if one of the big boys came knocking.

What are you planning to launch next?

My next release is Adana the Earth Dragon on April 22 (Earth Day) along with the companion coloring and activity book.

I’m also working on book 5 of my P.A.W.S. Saga, “Cotula”, which I hope to have out by the end of the year. Also my illustrator, Tina Wijesiri, is currently drawing the pictures for a junior tale from P.A.W.S. story geared towards younger elementary school kids.

Now for some just-for-fun challenge questions…

What type of book do you reach for to lose yourself in? Any favorite titles/authors?

Puzzles and board games, often with my son, Joey. Plus going to concerts with my daughter, Ronni.

Do you read your book reviews? How do you deal with good or challenging ones?

Yeah, I mostly read them. I try not to let the negative get me down (it’s par for the course when you’re a writer. Not everyone’s going to like what you do.)

When you get a story idea, do you scribble it on any scrap of paper or napkin you can find, or do you have a special notebook or online tool where you keep all the inspiration?

If I’m out and about I yes scribble it on whatever I can find. At home I’ll put it in a doc on my PC for another time. (I’m trying not to get distracted from my work-in-progress.)

If you could go back in time before you started your author career, what advice would you give yourself?

Start earlier. I’ve been writing since I was a kid, but didn’t start taking my writing seriously until 2012 when I came out of cancer treatment. Before then I had thought that I had all the time in the world to write, so I delayed it thinking I’d write a novel when my kids were older.

My brush with cancer made me realize my mortality. I learned that if I really wanted to write and be published I needed to start now. If I could go back in time I would have started earlier.

Here’s where to find and follow Debbie, and purchase her books!